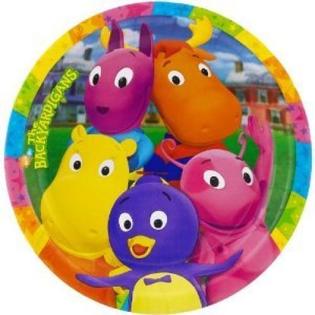 Have your own Backyardigans Party and invite Tasha, Uniqua, Austin, Pablo, Tyrone and the rest of your friends to your backyard! Pick your favorite episode and decorate to match. Have your guests dress as their favorite character or become a Pirate, Super Spy, Wizard, Yeti, or The Lady in Pink!

Host your very own Backyardigns party inside or in your backyard, park or soccer field.

Play some fun music and have a dance to show off your best Backyardigans dance moves. Don’t forget about the snack. That’s the most important part!

“We’ve got the whole wide world in our yard to explore! Now it’s time for us to have a snack! Meet you next time when we’re back.” -end backyardigans theme song.

Tasha, Uniqua, Austin, Pablo, and Tyrone all love going on adventures, but using all this energy makes them hungry. After playing lots of fun Backyardigan party games, all your friends may be tired too. At the end of most episodes, our characters go off and have a snack together. Sometimes these snacks are more healthy than others.

Below is a list of the various episodes and what snacks the characters eat: