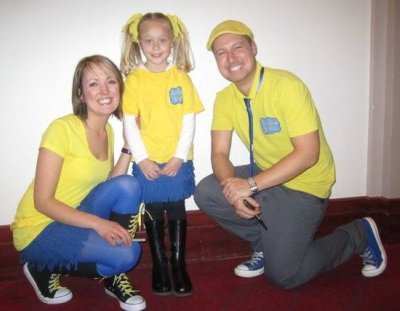 Throwing a childrens party can be lots of fun and must remain magical from the start of giving out invitations to the finish of handing out loot bags. Here is a moms take on on her daughters "dream" Splash 'N Boots birthday party with actual ideas from a five year old.

These would have to be unique, a calibration of my child's top 10 favorite Splash 'N Boots songs made into a personalized CD featuring pictures of her and Splash 'N Boots and all the typical party information.

Your invited to a "Monster Party" featuring Splash 'N Boots, the date, time & location would also appear along with a little twist on a RSVP: please call their agent (parents name) to reserve your backstage pass. Lastly, a note at the bottom to come dressed in theme colors - yellow and blue. 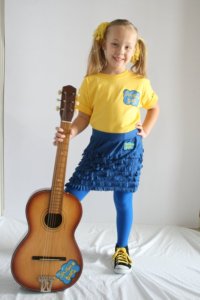 I want to be part of the band!

It would be nice to assume the availability of the true Splash 'N Boots but more realistic for most to find a inpersonation duo. I would give them a list of songs to become familiar with to sing (or lip sing) and the official
Splash 'N Boots website to watch some videos and maybe learn a dance move or too so they are completely in the groove on the party date. A small stage would be built by a handy dad however a deck or patio would also work to decorate. Lots of balloons because large BOOTS would be hard to replicate, tableware such as plates, cutlery, etc, streamers and a stage back drop would all be purchased in the traditional themed yellow and blue colors. Another mix of music not on the performance list to play during the other portions of the party should also be ready.

Guests can be greeted and welcomed with a lanyard and backstage pass which were promised to wear around their necks (can be purchased at most party stores or online) Leis in blue (boys) or yellow (girls) could be another option.

A craft/coloring station should be made available until everyone has arrived. Pirate or cowboy hats to decorate could be an option as they could be incorporated into the big show through two different songs (Treasure of Gold and Whoopie)

Once your attendance is at full capacity, I would start the party off with a fun and easy game which also ties in the title of the party. Have the children sit in a circle and pass a microphone around (although any object will do) as I sing........ knock, knock who can it be won't you come in to my monster party (my 5 year olds favorite Splash 'N Boots song) The one left holding the microphone would be out, the game repeats itself until there is only one child left. Keep in mind all participants should recieve a small token just so there is no hurt feelings. Another variation to this game - wrap up a present (Splash 'N Boots tshirt) several times with easy to rip off tissue paper, sing the same song and continue until the layers are all off, this way there is no elimination and everyone plays to the very end.

The musical guests will soon be arriving, so serve up some lemonade (yellow) or koolaid (blue) as drinks will be needed throughout the entertainment. Depending on the length and time of day of the party a small snack could also be served such as corn twists (yellow) or popcorn (also a name of a Splash 'N Boots song) both of which are allergy friendly.

Once your performers arrive have them start the concert right away with songs such as "Monster Party, Frieda and Tresure of Gold" all are high energy and particapation songs. Encourage everyone to get up and dance and make some noise.

Take it down just a notch and play a second game with the song "Whoopie" (another one of my daughters fav's) as the accompaniment in "Freeze Dance". Have all the children who are all probably up at this point and even invite the parents as you play and stop the music. The goal to the game is to hold your position for a small period of time (age pending) Again you can choose to elimanate or not but remember to reward for playing.

Keep it simple and easy since you are dealing with little ones, offer a variety of sandwhiches (not peanut butter) made in the shape of guitars - cookie cutters can be found at Bulk Barn stores. Fruit such as bluberries (blue) and pineapple (yellow) would also be good choices. The cake could be made from a rectangle pan and cut into a Splash 'N Boots T-shirt, frosted yellow with blue writing. Other shapes of interest could be a guitar (mold available at Bulk Barn) or a set of boots. 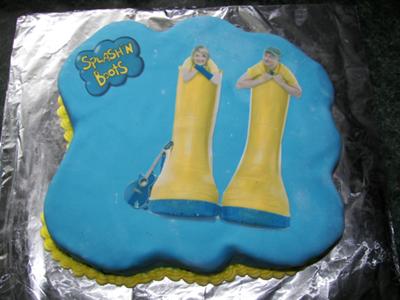 Now is a good time to open the presents and also take some memorable pictures with your musical guests.

Naps may still be an issue with some small children, so try to keep the party to 2 hours in length. Have everyone say good bye to Splash 'N Boots and take this as your cue to hand out loot bags. Since there are no small items available as of yet on the official website your creativity needs to shine here! All items should again be colored in theme and may include the following found at most dollor or party stores:

A simple picture of their child and the musical guest or the birthday girl is a great way to say thank you with a few simple words written on the back including the date of the party.

I hope you find some of these ideas new and/or useful. Children only have one birthday party and a year - make it special!