by Charlotte A. (Denmeadn, Hampshire, UK) 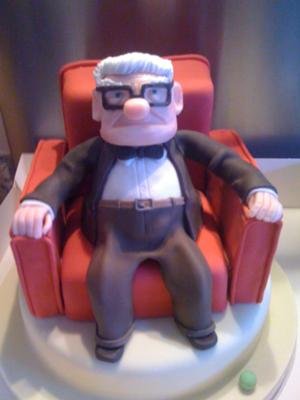 A friend of a friend absolutely loves the film and especially the main character Carl and asked me to make him a birthday cake of him sat in his favourite chair.

About Disney Pixar's Movie "Up":

Pixar Animation Studios has done it again with another comical, entertaining hit movie that’s perfect for all ages. When retired balloon salesman Carl Fredicksen makes a desperate attempt to fulfill his wife's and his childhood dreams, he soon realizes that he is not alone in his house that is flying thousands of feet in the air by thousands of balloons tied to his house.

When faced with new challenges, Carl’s adventures proves that sometimes one dream leads to another.